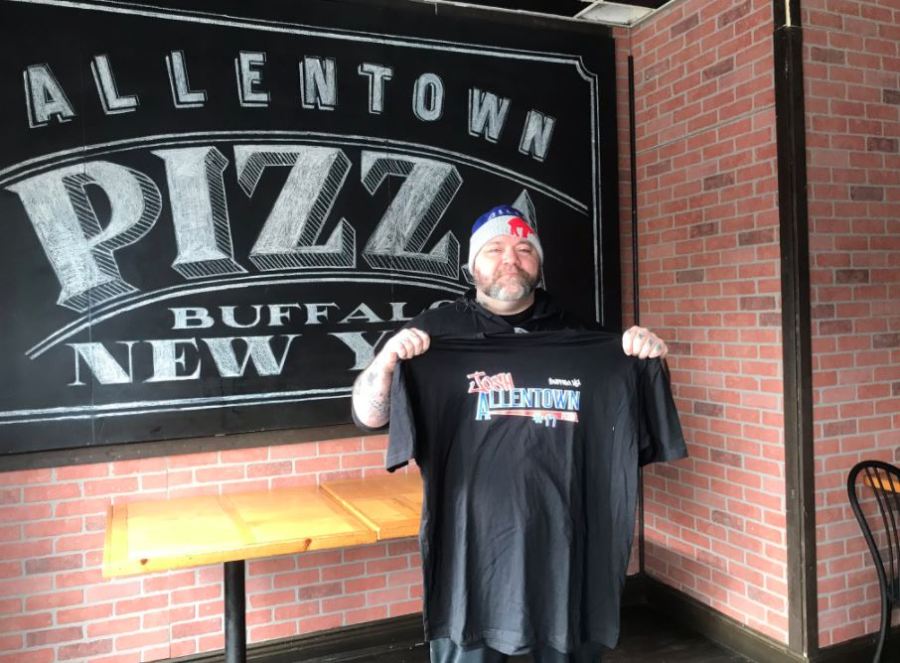 The pizza shop was even featured in shots of Buffalo during Saturday’s playoff game against the Baltimore Ravens.

“I had the idea for a long time,” Allentown Pizza owner Joe Mahiques said. “As soon as we drafted Allen, I was like ‘cool, it’s going to tie into Allentown’.”

Mahiques had some t-shirts with the logo made up for his employees, and there was quickly a demand for more.

So now, the proceeds from each $17 Josh Allentown Pizza t-shirt will go to the Patricia Allen Fund at Oishei Children’s Hospital. The fund is named in honor of Josh Allen’s late grandmother, and it’s been a favorite cause for the very charitable Bills Mafia this season.

“Donations to the hospital and the Patricia Allen fund are critical in supporting the kids and families who turn to us in the most serious circumstances,” Andrew Bennett, vice president of The Children’s Hospital of Buffalo Foundation, said in a statement. “Children’s hospitals across the country, especially ours here in Buffalo, are largely underfunded and every donation helps us provide that care. Thank you Allentown Pizza for this generous support!”

The t-shirts can be purchased at the pizzeria or online here.

In the past week, Mahiques estimates about a hundred t-shirts have been sold.

“More and more orders keep coming in- I’ve got orders from Idaho, Florida,” he added. “People are interested- we’re having fun with it, and we’re loving the Bills in the playoffs.”

The feeling of Bills spirit is tangible in Allentown- there’s a “Josh Allentown” banner across the intersection from the pizzeria, and a new sign proclaiming “Welcome to Josh Allentown” is up in the neighborhood.

“I think we’re set up for success- I think we’re going to see a run similar to the 1990s, but with better results,” Mahiques said.

Although COVID-19 is limiting the celebrations the neighborhood can have this year, Mahiques is confident that Allentown will have something to celebrate next season as well.

“When it happens again next year, all of the businesses in the area can get together and do something cool with the name,” he said.

Kaley Lynch is a digital reporter who has been part of the News 4 team since 2017. See more of her work here.