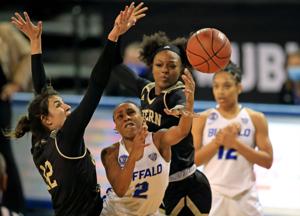 Back on the field in its first game since December 22, the University of Buffalo women’s team took charge in the second quarter and went on to win 75-67 over Miami (Ohio) at Millett Hall in Oxford, Ohio. It was the third without loss of UB Mid-America Conference play, which is heading to Ypsilanti, Michigan, to face Eastern Michigan on Wednesday at 7 pm.

Dyaisha Fair led the Bulls with 23 points, but she wasn’t even on the ground when UB kicked off their big win to start their second period. After the two teams played in a draw 22-22 in the first quarter, UB beat the first 11 points to start the second. Lauren Christie scored five points, Hannah Hall four and Kiowa Walters two points for the Bulls. Veer, who returned to enter the match mid-race, scored seven points in the rest of the period as UB made a 44-28 lead in the first half. Miami made only two baskets on 14 attempts in the second quarter while UB was 6 against 16 from the ground and 8 for 8 at the free throw line.

Miami Peyton Scott was the match’s top scorer with 26 points.