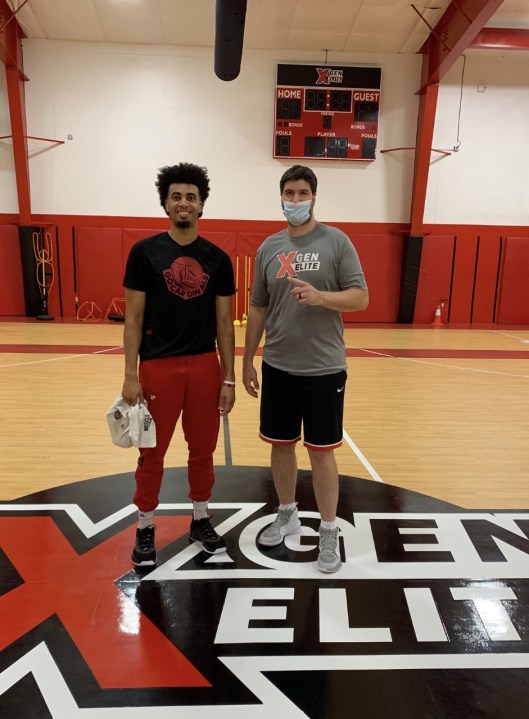 It’s not like Darren Fenn was hanging out at the end, playing with string and collecting a check. far from it. In the 2014-15 season, Finn averaged 15 points and 7 rebounds in Würzburg Germany’s ProA Basketball League match.

Finn played 14 seasons and found a niche as the modern and versatile big man at the highest levels of European hoops. At the age of six to ten, he can take smaller men into position or come out into Sagittarius and subtract three. At the age of thirty-five, he still had a lot of play.

But the Buffalo native thought it was time to go home and move on to the next phase of his life. Finn studied biology at Canisius College, where he starred for four years, but he didn’t think much of a post-basketball career until recently.

“I didn’t know,” said Finn, laughing. “Maybe that’s why I played 14 years. There’s not much you can do with a biology degree at that age. Training was on my mind. Going into business was on my mind. So it kind of became a mixture between the two.”

Finn wanted to train basketball players to earn a living. In a sense, he was preparing for his entire career. During all those years as a professional, in Germany, Japan, Russia and in regions in between, he studied the game. He took mental notes and jotted them down on paper as well.

For the past two years he has been working with young players, both in Europe and while on his return home in Buffalo. Before his final professional season, in the summer of 2014, his former college coach Mike MacDonald asked Finn if he would work on a struggling young man he had hoped would play in college: his son.

Patrick MacDonald was a bench player at Canisius High, who dominated the Catholic League at the time. His older brother Matt was a star in those teams. Pat didn’t score 10 points in a high school match.

But that year, after working with Finn over the summer, Patrick thrived as a player at SUNY. He started out as a freshman in ’14 -15, then made the whole conference his last three years into the Naval Third Division, finishing over 1,500 points and 1,000 rebounds.

“Darren was great with him,” said Mike MacDonald, now president of Damon. “It gave him confidence. I think it fostered a love for the game.”

Of course, confidence comes with skill, and Finn knew everything about playing as a center. He taught Patrick, who was 6-8 years old, how to be a more versatile offensive player. Patrick watched old films about Finn’s career to see how Finn expanded his basketball balance over the years.

“It was really special to see a great buffalo player playing at this level,” said Patrick. “When I started seeing results of what we were doing, he built that confidence naturally. Every time I worked with him, there was something I was doing really well.”

Today they joke that Patrick is Darren’s first big project. Seeing Patrick’s improvement helped confirm to Fenn that coaching players was his future. So after the 2014-2015 season in Germany he moved home forever with his wife Kimberly, who is a native of Orchard Park, and two girls (now 15 and 11). They also have a 4-month-old son.

Finn threw himself into basketball training when he retired. He was a head coach at Nichols’ School for a year, then took over the position of Director of Basketball Operations at St Mary’s – which had become the headquarters for his excellent basketball coaching business for some time.

The hoops were his true calling. Ultimately, Fenn changed the company name to XGen Elite. About two years ago, he and his partner purchased an indoor hockey facility on Mineral Springs Road in West Seneca and turned it into the XGen Elite Sports Complex.

The complex contains three playgrounds, a weight room on the upper floor, meeting seating areas and a mezzanine hall for players and their families. Finn and a crew of five run a busy basketball rally, which he described as unique in the area. They coach players and run tournaments and home leagues for all ages.

“In normal times, hundreds of kids and adults flock here on a weekly basis,” Finn said last week at XGen. “The tournaments are great, because each stadium works around the clock. Seventy or 80 people (in the mezzanine) hang out here. Teams are running morning, noon and evening. Everyone is in it. It’s loud, it’s hot, it’s so fun!”

Of course, this is in “normal times”. There has been nothing normal since the COVID-19 pandemic struck last March, near the end of the basketball season. Things have been tightly restricted in XGen Elite since then. This month, Finn would hold the November tournament for the fourth year in a row.

“We really took our stride in March,” said Finn. “Things were looking great and everything stopped completely. I can’t wait for some sense of normality so we can get back to playing basketball. I know a lot of our kids can’t wait too. They want to be in the gym and play.”

“We are very restricted to anything that has a connection. We don’t have quarrels or five on five. Everything is socially distancing training.”

The epidemic allowed Levin to spend more time with a private student – fellow Buffalo Jordan Noora. For the past six months, Nwora has worked with Fenn at XGen. Nick MacDonald (Pat’s brother), who plays in Niagara, also worked with them during the summer.

Last week, Nwora was drafted into round two by Milwaukee Bucks. , Becoming the first Buffalo recruited in 10 years he didn’t know what to expect at first, but realized he had become a more polished prospect under Finn’s tutelage. He started coming to the gym every day.

“He has the experience,” said Nora. “He played outside and was a great college player too, and he pushes me every day. There are things he knows I don’t want to do, but he pushes me and makes me better every time I come here. That’s what I needed.

MacDonald and Nwora made use of Fenn’s broad set of longitudinal knowledge. Raised as a position in the position, he was drawn to the three-point streak during his overseas career. Most of all, playing in Europe exposed him to the many styles and philosophies of basketball.

Finn says the big misconception is that there is a unique “European” pattern of rings, distinct from its American cousin.

“I don’t think people realize,” said Finn. “When players come to the NBA from Europe, they are grouped together as Europeans. But the game is played completely differently in different countries.

France plays a very different game than Greece or Germany. France is super athletic. Greece is very materialistic. So there are different styles and schools of basketball within those countries. It’s amazing how different the game sometimes and how many differences there are.

“This little game, with 10 people, a ball and two balls, there are a million different ways to play it. It’s a very creative game.”

One noticeable change over the past 25 years or so is the emergence of the versatile gigantic man shooting from the ocean. Fenn doesn’t know if he’s real NBA material, but his game will translate better today. He might have had a bullet.

He has picked the minds of many coaches when he was a professional, including Dirk Bormann, who coached Fenn in Germany – and also coached the German national team – and was the first coach to give Darren the freedom to take three-pointers in a. Regular base.

Finn realizes that he was preparing to be a coach and coach along the way. He says it was his major in psychology that ended up being more useful than a biology degree. Long ago he gave up on dreaming of being a doctor. Presently, he is working on youth games.

There is a mental side, of course. A good teacher allows students to discover the possibilities within them. This is what Finn did as a player. Life was a constant discovery and he never stopped learning – while he was seeing the world with his family.

Patrick MacDonald looks back and realizes that Finn saw the untapped potential in a poorly performing Buffalo kid a few years ago.

“One hundred percent,” MacDonald said. “I remember playing for my dad when I was 3 or years old. When I was 19, 20, 21, home for the summer, I was looking for videos of him playing in college and outside. He was a great inspiration and a source of confidence, seeing someone like him he could did that “.

“I think gaining that confidence in court has been carried over for the rest of my life. It’s a big part of why I am now in my career.”

MacDonald secured his mandate in the US Navy and is currently training to operate nuclear-powered aircraft carriers after two years of learning to sail a naval ship in San Diego.

“It’s very different from basketball,” he said. “But just like being an athlete, it takes a lot of patience and confidence, the same things you do day in and day out as an athlete, improve yourself and improve the team. It conveys straightforward.”

This is what any good teacher yearns to hear, that lessons are overwhelmed and that education continues in life. Finn is 40 now, and the mission must have just begun.