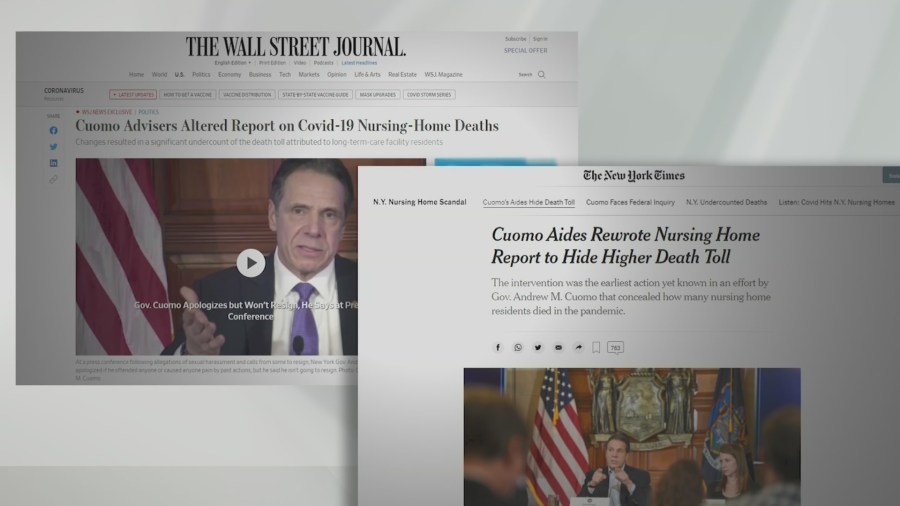 (WIVB)– The exodus of top talent from the governor’s office could stem from a firestorm over the state health department’s nursing home statistics.

The Wall Street Journal and New York Times issued blockbuster reports on that controversy this week.

Those statistics have become a hot button item because many of the Governor’s critics blame him for forcing nursing homes to take back residents that tested positive for COVID-19, the highest nursing home fatalities for any state in the country.

The Times and the Wall Street Journal cited sources in state government saying top aides to the Governor were manipulating nursing fatalities that went into a July report where COVID patients that later died in a hospital were excluded from the toll at the nursing homes but were included with the overall figures.

“The bottom line number does not change, you die in a hospital, you die in a facility, they are together that is your total number,” said Governor Cuomo.

The governor’s camp has said they were holding back numbers in response to the U.S. Justice department’s queries later in the year, but the Wall Street Journal says the July report focused only on residents who died in the long term facilities leaving out those who died in hospitals for political purposes.

In the New York Times, health officials felt the governor’s office wanted to simplify too much they worried it was no longer a true scientific report.

But it all came to a head with the Attorney General releasing a blistering report accusing the Cuomo administration of undercounting nursing home deaths by as much as 50%.

Among those re-writing the Health Department’s initial findings was James Malatras, a long-time advisor to Governor Cuomo.

Malatras is now SUNY Chancellor and he read a short statement responding to those blockbuster reports.

“There were back and forth with structure, citations, and other language during the process. But to be clear, I included the fatalities data provided by the New York State Department of Health which I did not alter and change. So I am going to leave it at that. Thank you,” Malatras said during a press conference.

Special counsel for the governor responded to the accusations of fudging the health department’s figures, saying research has shown the spike in COVID cases was due more to nursing staff bringing the virus into those facilities than transmission from patients returning from hospitals.

Regarding the exit of Deputy Superintendent & Special Counsel Gareth Rhodes and First Deputy Press Secretary, Will Burns the following statement was issued by Senior Advisor to the Governor Rich Azzopardi:

“Gareth graciously agreed to temporarily put aside his duties at the Department of Financial Services and join the Task Force, in which he worked night and day for a year, and is now returning to his normal duties in the administration. Will informed us he intends to attend law school next year and is seeking another position in the administration while he prepares for the LSATs.”

“In her tenure with NYS, Erin Hammond has worked in DOH Government Affairs, Public Affairs and most recently as a policy advisor and legislative affairs liaison with the administration.  Her departure allows her to focus on her family and has been planned for several months.”

The following statement was issued in regard to Press Secretary Caitlin Girouard:

“Caitlin is a world-class, top-flight communications professional who is well respected in New York, Washington and beyond. She’s been a real rock for our press shop, especially during the past year fighting the pandemic, and we wish her nothing but the best in her next chapter.”

Al Vaughters is an award-winning investigative reporter who has been part of the News 4 team since 1994. See more of his work here.