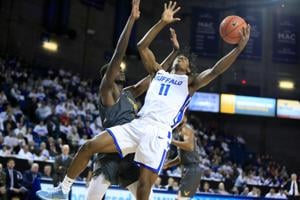 The University of Buffalo Men’s Basketball Team has got a new opening date for the 2020-21 season.

UB announced Tuesday that its season is scheduled to open at 4:30 p.m. Friday against Towson at the Bubbleville Championship at the Mohegan Sun Arena in Uncasville, Connecticut, the first of the two matches the Bulls are scheduled to play in the tournament; UB is set to face the military at 3 pm on Saturday.

UB’s first season opener against Gannon on Wednesday at Alumni Arena was canceled after Gannon had tested positive for Covid-19 on his show. UB was also slated to play Vermont and Yona in Bubbleville, but the Catamounts and Giles walked out of the action.