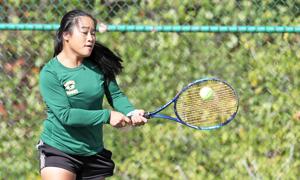 Eileen Wang of Williamsville North completed a victorious comeback to ECIC girls’ tennis by winning the league championship on Saturday at Miller Tennis Center in Williamsville.

After winning the Sixth Division title as an eighth grader in 2016, Wang withdrew from the school competition to focus on playing the USTA Junior Junior Tour. She returned as a senior student this year to complete her eligibility.